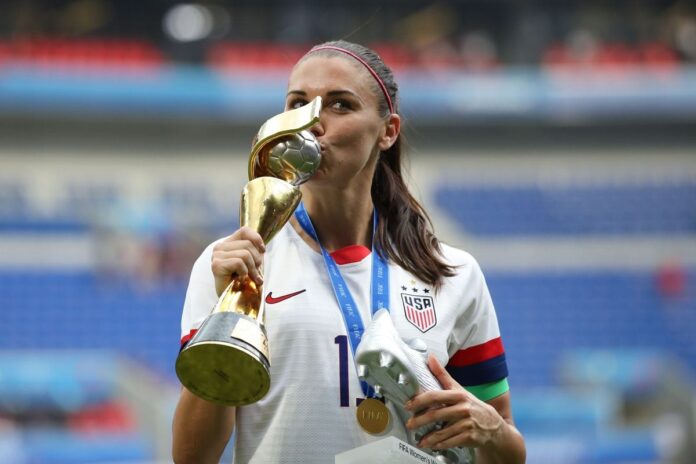 Without a doubt, we are talking about one of the best footballers in the world. We present to you seven facts that you surely did not know about Alex Morgan.

Alex Morgan is one of the most talented and successful soccer players. Not only does she stand out for her beauty but qualities. Her talent has led her to be classified as a bulwark in the national team.

Morgan is a married woman who always fights for gender equality. She has also posed several times for Sports Illustrated in a bathing suit. However, we bet you did not know the data that we will present to you about the American below.

1. Alex Morgan was the first woman to be on the cover of FIFA

American soccer player Alex Morgan accomplished something historic in EA Sports’ FIFA video game. In its version in the United States of FIFA 16, Morgan is on the cover next to his idol Lionel Messi, thus becoming the first woman to appear as the image of this game and getting a little more equity to begin in genres. Also, that edition was the first to feature women’s clubs.

2. Alex’s husband is a soccer player and Mexican, Servando Carrasco

On December 31, 2014, Alex Morgan married fellow soccer player Sevando Carrasco, a Mexican American who currently belongs to the Los Angeles Galaxy. The two met during their stay at the University of Berkeley in California. Morgan was the star of the women’s team, while Carrasco was in the men’s branch. They have been together since and have lived in Portland, Orlando, Los Angeles, and Seattle.

Before the Women’s Soccer World Cup in 2015, American soccer player Alex Morgan along with Abby Wambach and Christen Press, part of her country’s national team, was ‘symphonized’ by FOX, which has the rights to ‘The Simpsons’ and an episode even came out to honor them.

4. In addition to soccer, as a child, Mogan practiced Athletics and Basketball

Despite ultimately leaning toward playing soccer, American Alex Morgan before that played sports like basketball, volleyball, and even track and field. However, her dream was always to be a soccer player, although it wasn’t until she was 14 that she entered soccer school.

5. Alex is the writer of a series of children’s books

Alex Morgan is passionate about reading, and her favorite books are ‘To Kill a Mockingbird’ and ‘A thousand splendid suns.’ Although the most impressive thing is that she is also a writer. Morgan has a series of children’s books called ‘The Kicks’, which is about what he loves the most, soccer and always fighting for your dreams.

During an interview she conducted in the United States, the soccer player revealed why she decided to wear her pink headband. That was in support of the mother of her husband, Servando Carrasco. The footballer’s mother is a breast cancer survivor, and at the time, she was battling the disease. Nowadays, it has become an accessory that identifies her, which helps her always improve herself.

7. Alex Morgan will shoot a movie at Warner Bros studios

The historic American footballer will debut on the small screen as part of a Warner Bros Pictures project titled “Alex & Me.” This movie is about a teenage girl named Reagan, whose dream is to play soccer, but when she is humiliated by her rival and left out of the team, she thinks that it is all over. However, one day she hits her head, and her Alex Morgan poster comes to life, and she becomes the American soccer player who will teach Reagan to remain confident and achieve his dream of playing soccer. The film will be on sale on Blu-Ray and DVD starting June 26, 2018.