Addiction is now widely understood to be a treatable disease that does not discriminate on the basis of race, gender, or occupation. Yet there remains a pervasive and unfortunate stereotype that people who become addicted to drugs or alcohol are “bad” or “defective,” although these stigmatizing labels would never be used to describe someone with another disease, whether diabetes, high blood pressure, or cancer.

As a fitness supervisor for an addiction treatment center, I can vouch for the fact that the disease of addiction can affect anyone. (Learn about how inpatient rehab at FHE Health is helping people recover from a drug or alcohol problem.) Even elite athletes—people at the top of their game who got there through enormous grit, determination, and mental, emotional, and physical self-discipline—develop addiction. Skeptical? Consider these eight professional football players who overcame addiction and are now in recovery….

Aldon Smith knows what it’s like to hit “rock bottom” with an alcohol problem. It has happened to him more than once, between the multiple DUIs, team suspensions, and a domestic violence plea deal. At one of the many low points, “I was sleeping under a car,” he reportedly told one source. After getting sober, the 30-year-old recently got another chance to play pro football when he signed with the Dallas Cowboys.

Shane Olivea admitted to taking 125 Vicodin pills daily when he was at the height of his prescription painkiller addiction. It was an expensive habit that ended up costing him nearly 600 million dollars. Olivea began taking Vicodin at the end of his Rookie season with the San Diego Chargers. He entered treatment in the spring of 2008. Since then, he has remained sober, even when a back injury ended his career with the New York Giants. In 2015, he went back to school at Ohio State University, where he once played college football. He earned a degree in the sports industry at the age of 35 and hopes to be a mentor to younger athletes, educating them about the dangers of addiction.

Erin Henderson was in his sixth season playing for the NFL when his substance abuse and co-occurring bipolar disorder and depression spiraled out of control. After a second drunk driving arrest, the inside linebacker for the Minnesota Vikings was able to avoid jail by entering rehab. (He had also been charged with possession of ten grams of marijuana and paraphernalia.) After he got sober, and in what commentators hailed as one of the great “comeback” stories, Henderson returned as a starter for the Vikings and to play another three more seasons in the NFL.

Erik Ainge, the backup quarterback for the New York Jets, by his admission began using -drugs at the age of 12. Marijuana was his gateway. Ainge reportedly went on to use prescription painkillers, alcohol, cocaine, and heroin. (He became hooked on painkillers during his senior year of high school when he played through the season with a broken finger.) Like Henderson, Ainge has bipolar disorder. (It’s a serious mood disorder that often co-occurs with addiction.)

Terry Tautolo was once homeless on the streets of Los Angeles and living under a freeway because of his alcoholism. The former linebacker for the San Francisco 49ers and 1981 Super Bowl winner got a second chance when his former coach tracked him down and with the help of the NFL paid for Tautolo’s time in inpatient rehab. Tautolo has been successfully sober since.

Ray Lucas, formerly quarterback with the Jets and the Rutgers Knights, was one of many in the NFL to be prescribed opioids for an injury and end up addicted. Today he is a living testimony to the fact that there can be life and recovery after prescription painkillers. He regularly talks to young people and others about the dangers of opioid addiction. “I went from taking 125 pills a month to 1,400 pills a month,” he told a town hall in 2019.

Randy Grimes, a center lineman for the Tampa Bay Buccaneers from 1983 to 1992, took painkillers for more than 20 years before seeking treatment. Like so many NFL players who accept that injuries and prescription painkillers go with the territory of pro football, Grimes was no different. He told one outlet that he saw painkillers as “a necessary evil.” It took almost losing his marriage and family to see he needed treatment. Since then, he has dedicated himself to saving more lives from addiction.

Brett Favre, who may be better known for his achievements on the field— among them, three-time winner of “AP Most Valuable Player,” “Best NFL Player ESPY Award,” and “Best Record-Breaking Performance ESPY Award”—also struggled with alcoholism and drug addiction. The Green Bay Packers quarterback and Hall of Famer relapsed and went to rehab at least three times before successfully getting sober. When he was 20, Favre was in a bad car wreck while driving under the influence, but even after that continued to drink heavily and use drugs. Things got worse before they got better, but ultimately Favre’s story shows that if at first one doesn’t succeed at sobriety, it’s worth trying again until it sticks.

Brett Favre. Randy Grimes. Ray Lucas. Terry Tautolo. Erik Ainge. Erin Henderson. Shane Olivea. Aldon Smith. All of these men struggled with the disease of addiction but were fortunate to find recovery with the help of treatment. Of course, many others in the NFL with similar struggles have not been so fortunate. (A case in point: Lawrence Taylor, widely considered to be the greatest defensive player in the history of American football, whose troubles with cocaine and alcohol have haunted him for decades.)

All of these lives and stories and the many more like them bear witness to the fact that anyone can get hooked on drugs and/or alcohol— even professional athletes and some of the fittest, toughest, and most resilient among us. And, if the disease of addiction can happen to anyone, recovery should be an option for everyone. That starts by ending the stigma.

This article was written by Ryan Walter, a professional trainer and fitness supervisor at the national behavioral health provider FHE Health. 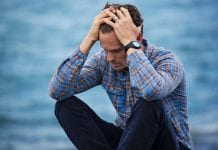 A Ray of HOPE – Hold on Pain Ends