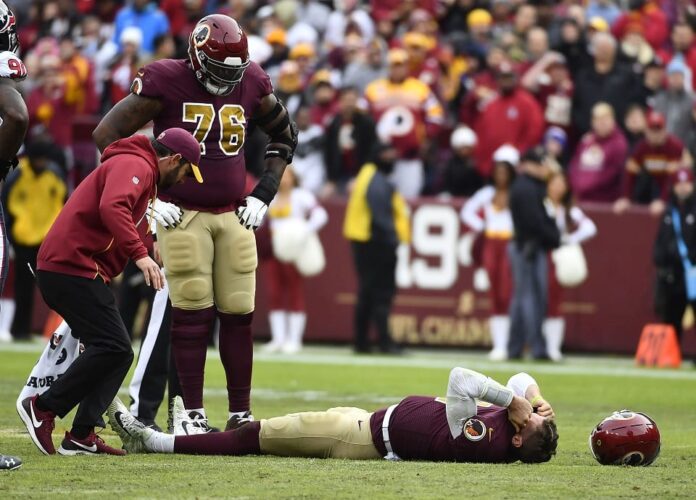 It’s no secret that American Football is a physically demanding sport. Big hits and hard knocks are part and parcel of the game but sometimes things go horribly wrong. Here we look at some of the most gruesome injuries in NFL history.

Kicking off our list of the most gruesome injuries in NFL history is Rashad Johnson. Strangely, it wasn’t until after the event that this injury made waves but it’s pretty horrific, nonetheless.

Johnson’s team had just been hammered 31-7 by the New Orleans Saints and as Rashad left the field of play all he was doing was ruing the performance his team had put in. His hand had lost a bit of feeling during the match but the Cardinals safety thought nothing of it.

When he got back to the changing rooms, he soon noticed his hand wasn’t a pretty site. Johnson had lost the tip of his finger. Even today, he doesn’t even know how he did it.

For all those people out there, that don’t believe in luck, we bring you Tyler Eifert. Unfortunately for him, it seems the only luck he has is the kind you wouldn’t want. The injury we’re including here is an eye watering ankle break from back in September 2018.

The Cincinnati Bengals took him in round one of the 2013 draft and he was showing signs of being a decent pick. There was one problem though, he kept missing games. 2013, 2014, 2015, 2016 and 2017 had seen him miss at least some game time owing to injury be it a dislocated elbow or recovering from back surgery.

When the 2018 campaign got underway, the Bengals changed the way they tried to manage him to maximise his time on the grass. Things were going to plan until they came up against the Atlanta Falcons.

The Bengals were narrowly leading in the third when Eifert attempted to drive forwards; De’Vondre Campbell had different ideas and tackled the Bengal – legitimately we should add – but Eifert’s leg went in two different directions. The tight end was left writhing in pain on the floor and needed surgery before making yet another return from injury.

If we were ranking these injuries based purely on what happened afterwards then Stingley would be right at the front of the running. Stingley was a round one pick back in 1973 as he joined the New England Patriots.

It’s where he’d spend the entirety of his short lived career. The wide receiver was very highly rated heading into the 1978 campaign and was on course to become one of the league’s best paid players – then he suffered a brutal blow.

The Patriots were up against the Oakland Raiders – who were regarded as one of the tougher teams in the NFL – when Stingley had his career ended. Stingley stretched for a loose pass when Jack Tatum nailed him shoulder-to-helmet.

The hit sent shockwaves down Stingley’s back breaking multiple vertebrae. He never walked again and, whilst some sub it a freak accident, Tatum has never apologised for the takedown. Stingley passed away in 2007 with causes linked to that infamous day.

Knox was fairly early on in his career when his injury struck. He was taken as the 140th pick in 2009 as the Chicago Bears saw promise in him. They were proven right as he earned Pro Bowl honours in his rookie season. The next year he was again one of the better performers for the Bears. 2011 was not so kind; that might be a hefty understatement.

The Bears were facing the Seattle Seahawks when fate dealt Knox a bad hand. It was early on in the first quarter; Knox had fumbled the ball into no man’s land and lunged forwards to keep things alive, however, Anthony Hargrove had the same idea.

The sizeable defensive end caught Knox at an ugly angle and, rather than hit through the player, he essentially folded Knox in half. Knox fought tirelessly to make a comeback but it just never happened and now we’ll never know what his potential would have developed in to.

Everyone who follows the NFL knows about the fate that faced Joe Theismann. It doesn’t make it easier to talk about though. Thankfully, Theismann’s greatness has been around the sport for some time given he’d excelled in the CFL before joining the NFL where he spent another 11 years. It’s hardly much comfort given the way things ended though.

The one-time Super Bowl champion and league MVP had exchanged passes with fellow Washington man John Riggins. The New York Giants had a plan to deal with Theismann’s talent though and as they rushed him things turned ugly. Very ugly.

Lawrence Taylor made the initial sack, but the momentum of his jump carried him onto Theismann’s leg. It had nowhere to go and, as such, snapped. Bang. Gary Reasons and Harry Carson, unaware of the injury, piled into the sack but Lawrence instantly called for help with his head in his hands. There was no way the quarterback was getting up.

His break was open meaning his bone had broken the skin and dug into the field. He never played again.

There you have it, the most gruesome injuries in NFL of all time. Click here to read more on BetAmerica’s website about the injury history of NFL.