The Spanish language is spoken by around 360 million people globally. Despite this, Mexico had the largest number of Spanish speakers in the early twenty-first century, with over 85 million speakers. In addition, Colombia comes in second with almost 40 million speakers. Argentina has a population of over 35 million, the United States has over 31 million, and Spain has over 30 million citizens.

Spanish is the official language of over 50 countries, it is important for people to learn it if they want to be able to communicate with locals. In addition, Spanish is a key language for international business and diplomacy. Therefore, learning Spanish can be extremely beneficial both academically and professionally.

There are different ways you can learn Spanish. You can learn from reading a book written in Spanish with different topic that can be a novel about some epic story or an autobiography relate to people you are admired with. Also, Watching dramas can also be an interesting way to learn Spanish. By watching dramas, you can practice your listening skills in Spanish and learn vocabulary with a memorable plot. In this article, we are sharing with you how you can learn with YouTube channel and which are the top 10 YouTube channels that we think are helpful on your way to getting better or starting your journal of learning Spanish. You also can connect with one-on-one native Spanish Tutors that can help you improve your Spanish. Not only that, but you can also find a variety of tutors like English Tutors and more at AmazingTalker!

Top 10 Youtube Channels that Can Help You Learn Spanish 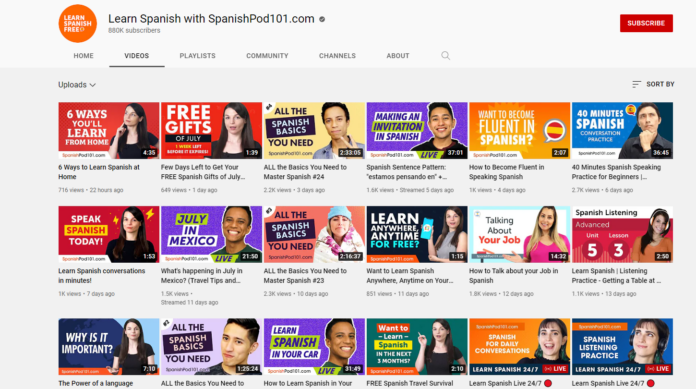 On the YouTube channel SpanishPod101, there is a range of videos in various Spanish accents. Moreover, This is also one of the reasons why this popular YouTube channel is an excellent resource for learning Spanish. Additionally, it not only thoroughly covers all of the fundamentals, but it also allows you to hear a variety of various pronunciation techniques. However, one of its flaws is that the films do not seem to go together in a logical instructional plan. 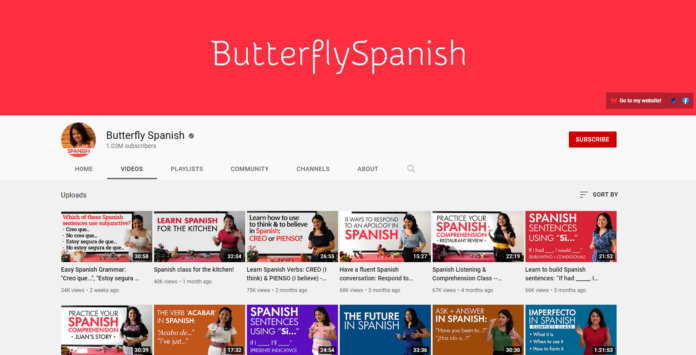 In Butterfly Spanish, you learn everything that you need to know to grow your Spanish language skill. Moreover, the channel’s instructor is a natural Spanish speaker who grew up in a Spanish-speaking area and studied linguistics. This channel teaches grammar, vocabulary, phrases, and pronunciation in her films, and she will demonstrate how native speakers speak. Ana has just begun sharing tales to help with understanding, although we suggest double-checking her grammar on her profile.

This channel focuses on learning Spanish via the use of Spanish music. Although the organization provides a study app, YouTube videos are also a fantastic way to take a break from the Spanish language. However, this channel is the Spanish version of the song and the English translation. If the exercises get too tiring or exhausting, you may move to the fun song section to continue learning and developing your abilities.

Originally from Mexico, she and her husband Jim, who is from the United States, are a Puerto Rican couple who teach Spanish in two languages. The pair understands the difficulties that Spanish students encounter and tries to answer all of their questions. The proper way to ask for directions, tipping in South America, the best places to visit, national cuisine, and so on. In addition, they focus on a particular vocabulary and culture.

Juan is in charge of this channel, as implied by its name. Nevertheless, he is a Spaniard who now resides in London. According to Juan, Spanish is a language that should be learned in context. In this way, he tells true and false stories and portrays real-life events. Furthermore, this channel offers language learning recommendations, focuses on specific words, and explains Spanish culture.

Mara is an enthusiastic native Spanish speaker who provides intermediate and advanced students with the material. Moreover, She discusses sophisticated Spanish idioms and explains Spanish culture. This channel introduces everyday vocabulary and, of course, explains the grammar.

CultureAlley is a YouTube channel devoted to teaching people how to learn different languages from the ground up. However, Spanish is one of the languages available. The lessons are numbered, and keeping track of them is simple. Additionally, the explanations are in English, this is an excellent approach for Spanish students to master the essentials.

Specifically designed for those who are learning Spanish for the first time. Each episode will not only improve your ability to communicate in the language, but it will also greatly raise your confidence. In addition, for each video, there are free course books to download.

Learn Spanish has a variety of videos that are designed to help you improve your grammar and vocabulary. To make it simpler for you to comprehend the regulations. The explanations are given in English. In addition, Many films have written words to aid reading, while others include Ana. A cute and helpful kid who may be the finest Spanish instructor you will ever have.

Look no farther than The Spanish Dude for some fairly nice sarcastic humor mixed in with many grammatical facts. Moreover, He speaks at a breakneck speed and backs up his beliefs. The experiences with the Spanish language in many instances.

In conclusion, the YouTube channels are a great source to learn Spanish. It’s free and it’s easy to watch. Self-learning takes time and patience. To succeed, you will need to know what your goal is, how to reach it , and plan for that. When you are facing a problem, it’s always easier when someone gives you a hand. Check out with an online tutor, the one on one customized course not only helps you to improve your Spanish. It can also help you to plan for your self-learning.

10 Strategies to Motivate Your Child to Learn in 2023